Alioli: a touch of original flavor for your dishes | Choví

With meat, with fish, with your rice dishes… Aioli is a very versatile Mediterranean sauce. Try it now!

At Choví, we know everything about aioli making and about how to make the most of it. We are the leading company in terms of aioli production in Spain. Our star product is the renowned classic mortar aioli although, throughout all these years, we have discovered other recipes aimed at sating all sorts of palates.

Do you want to know more about how we make our aioli? And are you willing to learn some new recipes to surprise the most select palates?

How to make aioli: Choví's secret

Aioli is a sauce that is closely linked to the Mediterranean tradition. Did you know that it has been used since before the 10th century in Spain? Choví’s aioli recipe respects this tradition and that is why it is so successful.

How do we do it? Although the preparation is fundamental, everything starts by the aioli’s ingredients. If they are high-quality ingredients, it will be difficult to surpass the result.

If you want to make aioli yourself, take note of the ingredients we use at Choví. These are the high-quality ingredients that you will also find if you buy our Choví product.

One of the essentials for a good homemade aioli. The better de oil, the better the sauce. Choose the oil you want to use wisely. Depending on the flavour intensity you are looking for, you will need to choose one sort of oil or another. Not all of them are the same! For instance, our traditional sauce has a more intense flavour thanks to its 72% of oil content.

Garlic reduces the amount of cholesterol and has antioxidant properties. Indeed, it is the most important ingredient in the aioli recipe. Therefore, you must also know how to make a good garlic choice. For all of our sauces at Choví, we use purple garlic and we use it fresh and whole so it does not lose its aroma.

Although there are people who make aioli without egg, it is an important ingredient if you want to obtain a creamy texture right away. This is one of the secrets of Choví’s aioli. In our most exigent recipe –the traditional aioli–, we use premium-quality free-range eggs in order to offer a homemade aioli, very close to the traditional aioli’s flavour.

Together with salt, lemon helps give the recipe its final touch. In case you are not an enthusiast of sour tastes, you can skip this ingredient. However, as you will notice in Choví’s aioli sauces, this is an extremely subtle touch that grants it a perfect flavour nonetheless. 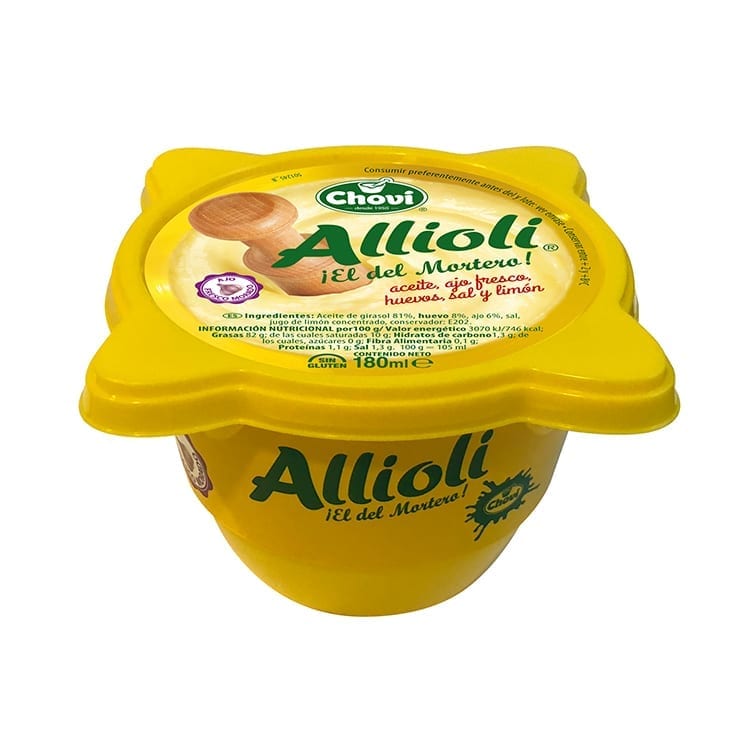 As if it were made at home, our Classic Mortar Aioli is our most popular recipe. Even the most exigent aioli pundits approve it. It is prepared with all of the aioli ingredients we have mentioned. Besides, there are several formats at your disposal, all of them with the characteristic mortar that has made our aioli famous internationally.

Our Classic Aioli features a traditional flavour with 6% of garlic content. 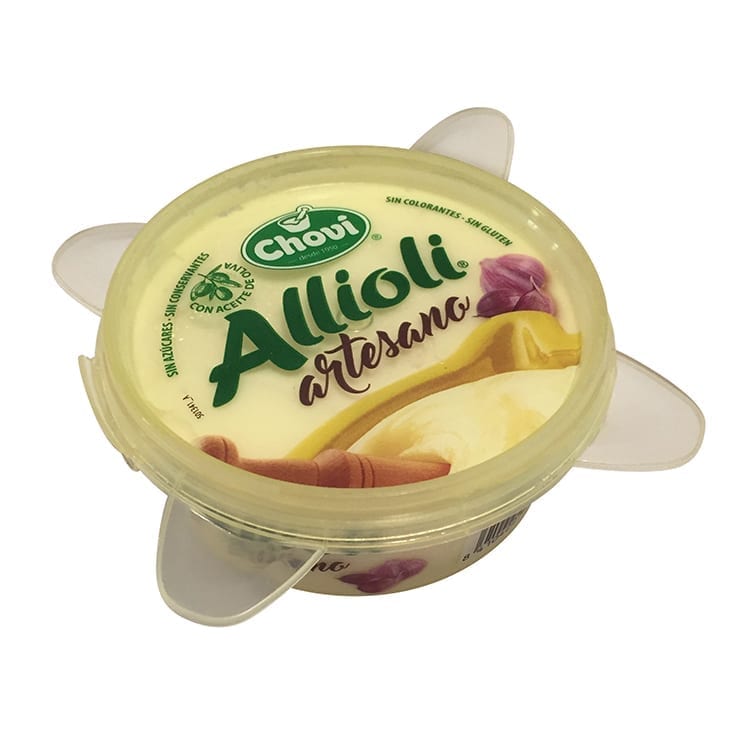 Apt for the most exigent, the enthusiasts of authentic flavours. This recipe has been devised for offering a more traditional flavour. With genuine olive oil and preservative free, this is the perfect sauce for the most traditional recipes.

Our Traditional Aioli features a genuine flavour with 10 % of garlic content.

A mild flavour, apt even for those who are not really garlic lovers.

This aioli sauce is particularly creamy and is smoother if compared to the Classic Aioli.

This sauce features a smooth flavour with 3 % of garlic content.

How is aioli made?

Each home, each kitchen, has its own recipe. However, the aioli recipe basically has the following ingredients: a glass (200 ml) of olive oil, 2 garlic cloves, a freshly pressed lemon juice, 1 pinch of salt and 1 egg.

Thickening this sauce is a delicate process, since it must be done with a circular movement until an emulsion is formed.

Some curiosities about aioli

Aioli was invented in Egypt

We have warned you… We are aioli pundits! We love preparing all of our unique aioli recipes and we know everything about the sauce. Do you want to know it all too? These are some curiosities about aioli sauce.

You may associate aioli to a terrace beside a Spanish Mediterranean beach but, in truth, aioli has travelled a lot since its beginnings. All evidence suggests that aioli sauce was invented in ancient Egypt.

The Romans took a liking to this sauce during their invasion. In fact, they liked it so much that they commonly used it in many areas of the Roman Empire after they discovered it, especially in Mediterranean areas such as the Italian Peninsula, Sicily, Calabria, Valencia, the Balearic Islands, Catalonia, Murcia or Andalusia.

But this is not the only version of the story! Others say that the Iberians, the dwellers of the Iberian Peninsula before the Romans arrived, already used a very similar sauce that had oil and garlic as the main ingredients.

This could mean that this sauce appeared simultaneously in different regions where oil and garlic were harvested.

The first recipes date back to the 20th century

Although its invention occurred much sooner, this sauce was first used in the 10th century. That is why aioli appears in some of the oldest preparations of Mediterranean cuisine.

Actually, those recipe books include different aioli preparations. Of course, oil and garlic are the essential ingredients in all of them. What changes is the beating intensity and, therefore, the sauce density and creaminess.

Some of the ingredients change as well. As a matter of fact, we can find some versions with milk or cream cheese.

Its official name is ‘allioli’

Undoubtedly, this is a very controversial topic. What is the official name for the aioli sauce? In Catalan-speaking areas, this sauce is known as allioli, as a combined word derived from all (garlic) and oli (oil): all-i-oli.

Although this word has been translated into Spanish as ‘alioli’, there are still more versions. Some refer to this sauce as ajoaceite or even ajiaceite.

In conclusion, it seems that there are as many ways of referring to this delicious sauce as the number of recipes registered. But which is the official form in Spanish?

The dictionary of the Spanish Royal Academy includes all these versions except ‘allioli’, since this is a Catalan word. Both ‘ajoaceite’ and ‘ajiaceite’ are included in the dictionary, although the recommended form –also by Fundeu– is alioli. It is also spelt alioli in Galician.

Choví’s Commitment: At Choví, we have a commitment towards quality that ensures a thorough work method and makes it possible for us to offer high-quality products that meet the expectations of our clients and suppliers.

This website uses its own and third-party 'cookies' to offer you a better experience and service, to obtain statistical and analytical data of your navigation and to facilitate your interaction with social networks. By browsing or using our services, you accept our use of them. More information about our cookies policy and how to change your browser settings Here.
.Accept
Política de cookies

Any cookies that may not be particularly necessary for the website to function and is used specifically to collect user personal data via analytics, ads, other embedded contents are termed as non-necessary cookies. It is mandatory to procure user consent prior to running these cookies on your website.